I made these for my Granddaughter to give to her Daddy. Happy Birthday Merv!

The cupcakes were made using a basic cupcake mix along with a basic buttercream mix, before topping buttercream and fondant shapes.

Method Pre heat the oven to 180C/gas mark4 and line a muffin tin with paper cases.

In a mixing bowl, cream the butter and sugar until the mixture is pale and smooth. Add the eggs, one at a time, mixing for a few minutes after each addition.

Combine the two flours in a separate bowl. Put the milk in a jug and add the vanilla extract to it.

Spoon the mixture into the cake cases, filling them to about two-thirds full. Bake for about 25 minutes or until slightly raised and golden brown. Once removed from the oven leave in the tin for 5-10 minutes before transferring to a wire rack to cool completely.

Ingredients for the buttercream

For the above cupcakes I only used half of the buttercream ingredients.

To decorate I first spread the buttercream over each cupcake, before adding cut out ready to roll fondant circles of different colours. I then added the fondant stars and letters. I then made the little fondant man by rolling a small piece of fondant into a U shape. Attach a small piece of fondant the end of each leg for the shoes. Make a small sausage shape to use for the arms and a tiny piece of fondant for a nose. Roll a piece of fondant into a ball then shape it into a body to add to the closed end of the U, roll a smaller piece of fondant to use as the head (luckily my Son-in-Law is bald so I didn’t have to worry about making hair :-))). I used a cocktail stick to make indentations for the eyes then using a tiny paint brush coloured the indentations using writing icing, I then used a small lid and at an angle pressed it onto the face to make the smile, then coloured the mouth in the same way as the eyes.

To ‘stick’ the fondant shapes together, I used a small paint brush and dabbed them with water before putting them together. I did the same with the little man, but just to make sure he didn’t fall apart I pushed a cocktail stick up through him, leaving enough stick poking out so that it could then be pushed down through the cupcake 😉 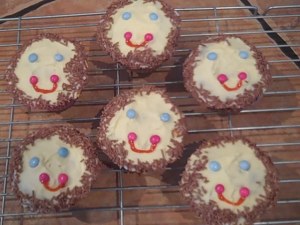 This is the same cake recipe as I used for the Animal cupcakes.

Preheat the oven to 180C/gas mark 4. Place 12 paper cases in a muffin tin. Beat the butter and sugar together until soft and creamy. Gradually beat in the eggs and syrup.

Sift in the flour and spices and gently stir until combined. Stir in the ground almonds and milk until smooth.

Spoon the mixture into the cases and bake for 20 minutes until golden and springy to the touch. Leave to cool in the tin for 5 minutes before placing onto a wire rack to cool completely.

To decorate I made up a small amount of buttercream:

Combine the icing sugar, vanilla extract and butter in a bowl and beat until light and fluffy.

Spread over the top of the cupcakes. Dip the edges of the cupcakes in chocolate sugar strands, add mini chocolate beans for the eyes and corner of the mouth then add a smile with a tube of writing icing.

a few drops of vanilla extract

Preheat oven to 180C/gas mark 4. Place 12 paper cases in a 12 hole muffin tin. Beat the butter and sugar together until light and creamy.

Add the milk and eggs gradually, beating well. Sift in the flour and baking powder.

Spoon the mixture into the paper cases.

Bake for 15 – 20 minutes, until golden and springy to the touch. Leave to cool in the tins for 10 minutes before removing and placing on a wire rack.

Sift the icing sugar into a bowl and gradually stir in the vanilla extract and enough hot water to make a thick, smooth icing. Divide the icing in half and colour one half pink and the other half yellow, with a few drops of food colouring. Spread the icing over the cupcakes, then decorate with the cupcake toppers, pressing them very lightly into the icing, then finish them off by adding a tiny drop of red writing icing.  Leave to set.

Fishkeeping On A Budget.

We aim to make Aquatics accessible to people of ALL incomes and lifestyles by demonstrating cost-effective products and methods to set up and maintain a thriving aquatic ecosystem without spending a fortune!

Visit our class blogs regularly to engage with the journey of your child in Year 3.

Visit our class blogs regularly to engage with the journey of your child in Year 2.

At Coopers Edge School all of our class blogs are open to share with the world!

At Coopers Edge School all of our class blogs are open to share with the world!

Having fun baking and decorating cakes- come along for the ride.

Baking Joy Into Every Gluten-free Bite

the inside view on life and holidays in Languedoc, southern France

Vegi Food on a Student Budget

The place where I share all the crazy, amazing, interesting and informative facts I find online and offline.